The Donald Trump blimp, which depicted the US president as an angry baby wearing a nappy and clutching a mobile phone, has finally been "consigned to history".

The 20ft orange effigy first took to the skies over Westminster during protests against Mr Trump's visit in 2018, and has since flown in France, Ireland, Argentina and various locations across the US.

Now that the 45th president's term in office is coming to an end, it is "heading to its final resting place" at the Museum of London, to be conserved and possibly displayed for years to come.


The venue had previously said in 2019 that it was in talks to add the inflatable blimp to its protest collection.

The creators of the blimp want the item to serve as a reminder of the fight against what they describe as the "politics of hate".

In a statement, they said: "While we're pleased that the Trump Baby can now be consigned to history along with the man himself, we're under no illusions that this is the end of the story.

"We hope the baby's place in the museum will stand as a reminder of when London stood against Mr Trump – but will prompt those who see it to examine how they can continue the fight against the politics of hate.

Donald Trump like a 'mob boss' but he shouldn't be prosecuted, says ex-FBI boss Comey

"Most of all we hope the Trump Baby serves as a reminder of the politics of resistance that took place during Trump's time in office."

The museum's director, Sharon Ament, said staff were "determined" to get their hands on the blimp in 2018. 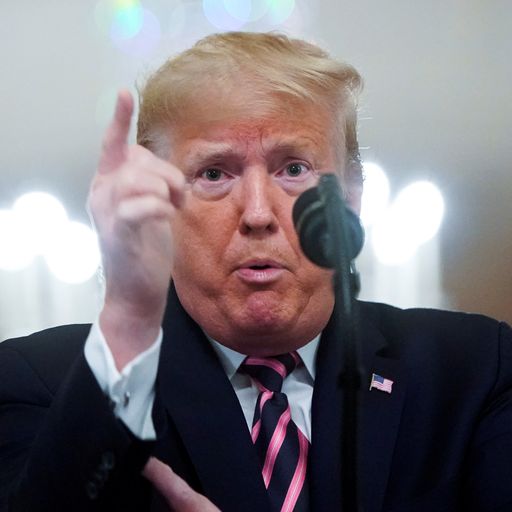 She said: "We did not know then what would transpire.

"Of course, the museum is not political and does not have any view about the state of politics in the States."

"We use humour a lot. And we poke fun at politicians. This is a big – literally – example of that.

Ironically, the blimp is now in quarantine in the museum, so it can be cleared of insects before it heads to the collection.

Ms Ament added that the blimp's final resting place is fitting, saying the effigy is a "response from Londoners".

Donald Trump steps down this week, albeit reluctantly, to be replaced by the winner of last November's election, Joe Biden.