Love Island has remembered host Caroline Flack with a tribute marking the first anniversary of her death.

"Always in our hearts," the show's tribute said, alongside a picture of the TV presenter.

Friends of the late star have also shared their memories, while the words "be kind" – posted on social media by the presenter herself in the months before her death – were trending on Twitter in the UK on Monday morning.

Flack, 40, died at her flat in north London on 15 February 2020, just weeks before she was due to go on trial for allegedly assaulting her boyfriend, Lewis Burton.

She took her own life after learning the hearing would definitely go ahead, and fearing the publicity that would come with it, a coroner concluded at her inquest.

Many close friends have shared messages and photos as they remember the star a year on from her death.

Love Island narrator Iain Stirling posted this picture of the pair together.

Author and presenter Dawn O'Porter shared a passage entitled When The World Stopped Turning from her book Life In Pieces, her reflections on lockdown published in 2020.

In the book, she describes Flack as "my funniest friend in the world" and one who "always showed up for me".

Singer Pixie Lott, who competed in Strictly Come Dancing in 2014 alongside Flack – who went on to win the series that year – shared a photo and said: "Love you forever and ever, beautiful tiny dancer.

"#bekind Caza always was to me and I still can't believe this happened." 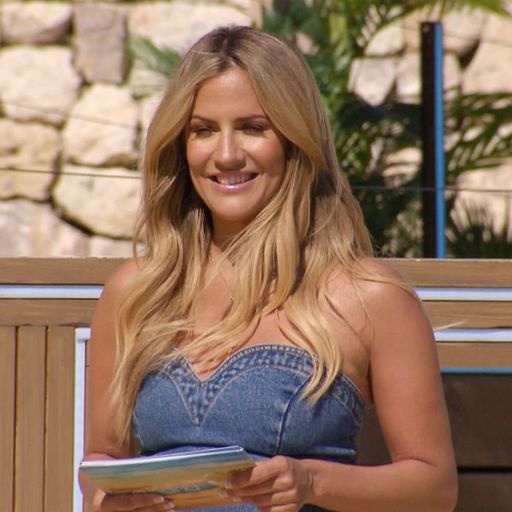 The life and career of Love Island's biggest star

TV chef Gizzi Erskine shared her tribute at the weekend. As well as remembering her friend, she also criticised "cancel culture" – the removal of support, including the boycott of someone, usually a celebrity or public figure – as well as some aspects of the "be kind" movement. She also criticised Burton.

Flack had been subject to much scrutiny in the press and on social media following her arrest and initial court appearance in December 2019.

"The thing that hasn't changed and actually seems to be worst is cancel culture," Erskine said. "We need to stop this and get a grip of ourselves. The press, the keyboard warriors, the 'be kind' mob – who are often the least kind of them all.

"I miss her so much. There's still so much unfinished business that I'll never lay to rest and most of all I really need her right now. Love you little button x power to her family and friends for this next bit."

Burton, who did not support the prosecution of the star, shared a photo and said: "I'll never forget you."

During the inquest into Flack's death, the star's mother Christine told the court her daughter "was not an abuser" and accused the police and prosecutors of having it "in for" her due to her "celebrity status".

After the hearing, Mrs Flack paid tribute to a "beautiful, fun, opinionated, kind, loyal" woman who was "full of confidence", but also "full of fears".

Anyone feeling emotionally distressed or suicidal can call Samaritans for help on 116 123 or email jo@samaritans.org in the UK. In the US, call the Samaritans branch in your area or 1 (800) 273-TALK