It was a night when stars accepted awards in tracksuit bottoms, pyjamas and hoodies from rooms with too many doors, and the hosts presented from different coasts (albeit with a whizzy background to make them appear united).

But despite heading into the 78th Golden Globes under a cloud of criticism over lack of diversity and dubious nomination choices, the ceremony was relatively hitch-free.

Finishing (almost) on time, and with an admirable cast of winners (including a host of British stars) there were laughs, tears and glimpses of stars' homes across the world as Hollywood enjoyed its first big awards ceremony of 2021.

We take a look at seven of the best bits of the night. 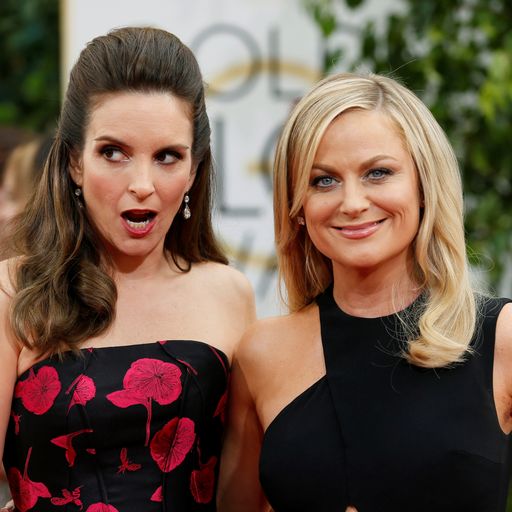 Golden Globes updates: Here's what happened at the virtual ceremony

Daniel, you're on mute!

With hosts Tina Fey and Amy Poehler hosting from two separate locations (Poehler at The Beverly Hilton hotel in Los Angeles and Fey at NBC headquarters in New York) and all the nominees attending virtually, there were bound to be a few technical hitches.

It started well, with near-seamless backdrops and the pair joking about being together – with Fey's disembodied arm reaching through the screens to stroke Poehler's hair.

But the first prize announcement didn't go to plan, with the sound cutting out for British star Daniel Kaluuya's Zoom acceptance speech.

"As you can see, we unfortunately have a bad connection," said previous winner Laura Dern, who was presenting the award. But as she started to apologise and congratulate Kaluuya, the sound returned.

It was unclear whether Kaluuya was at fault, or the sound engineer behind the scenes, but finally the 32-year-old was able to give his acceptance speech loud and clear, thanking Judas And The Black Messiah director Shaka King, the cast and crew, and his character's son and wife as well as rapper Nipsy Hussle.

Zooming with children and animals

The Undoing's Nicole Kidman and Ozark's Jason Batemen also had their little ones to hand adding a little family fun to the industry night.

Extended family got a nod too, with nominee Kate Hudson seen on camera with family members at one point, including her screen-legend mother Goldie Hawn with her long-term partner, Kurt Russell.

And for those keen to get some quality animal time, we got to see Emma Corrin's cat and Sarah Paulson's dog as they waited for their category to be announced – Olivia Coleman was particularly overjoyed at the pet presence, encouraging pet owners to go get their animal for more screen time.

Meanwhile, Regina King's dog, Cornbread, stole the spotlight in her pre-show interview, getting himself nice and comfy like a good boy in his dog bed, behind her as she chatted away.

Jodie Foster also had her dog with her as she won in her category, with the pooch wearing a bow to match Foster's jazzy pyjamas – the perfect chilled out evening combo to win an award in.

Too many doors and sports casual outfits

British star John Boyega spoke for the world in Zoom meetings over the last year, when he admitted he was wearing a tux on top, but joggers down below.

Accepting his award for best TV supporting actor for his role in Small Axe, the 28-year-old star said he was celebrating "home alone".

Admitting he was "shocked" to win the prize, he raised a leg to the camera, before confessing: "I'm wearing Balenciagas guys. I got tracky bottoms on my bottom, and they're comfy, but this is exciting!", before going on to thank those who gave him opportunities in his career.

Bill Murray rocked a neon-streaked Hawaiian shirt which he paired with a martini Bond would have been proud of; Jason Sudeikis wore a multi-coloured hoodie which he said he deemed "most appropriate" and Sandra Oh looked cosy in a padded green parka as she presented from a snowy slope – complete with a sledding dinosaur being slowly pulled across the screen in the background.

Meanwhile, social media couldn't believe how many doors Jeff Daniels had in his house.

With the 66-year-old The Comey Rule star sat in what appeared to be a bedroom – with a half-made bed in the background – and wearing a check shirt, many also praised his laid-back dad vibes.

One Twitter fan wrote: "Jeff Daniels is definitely live-streaming the Wings playing Chicago while waiting for his category to come up…", while another joked: "Jeff Daniels Zooming into the Golden Globes from every college student's first off-campus apartment".

Other notable props that caught attention on Zoom included the meme-tastic cut-out of Bernie Sanders in his mittens from the US inauguration which Ratched's Cynthia Nixon chose to position behind her, and the first female winner of the director prize in 25 years, Chloe Zhao, celebrating her Globe by raising a green ceramic mug.

Ben baked for the occasion

Turns out Ben Stiller isn't just a comedy talent, he's also a bit of a baker.

As the 55-year-old took to the stage to present the award for best actress in a musical or comedy he shared with the world his new penchant for cakes.

He told the socially distanced audience: "It's hard to believe it's been a full year since the last Golden Globes. But, like many of us, I've used that time to look inward and grow. I've come to fully understand the nature of crypto-currency. I read a book. I finally got around to dying my hair grey.

"Like so many other resilient Americans, I learned to bake. A delicious banana bread, in the form of a Golden Globe."

Producing the cake trophy, which looked more like chocolate sponge than banana bread in truth, he was all of us sharing our biggest lockdown achievement with friends over a virtual cuppa.

With Princess Diana back in the news thanks to Prince Harry and Meghan's forthcoming interview with Oprah Winfrey, the late British royal received a mention at the Globes too.

As royal drama The Crown stormed the TV categories – winning four awards overall – newcomer Emma Corrin paid tribute to Diana in her speech, saying: "Thank you so much to Diana, you have taught me compassion and empathy beyond anything I could ever imagine.

"On behalf of everyone who remembers you so fondly and passionately in our hearts, thank you."

Corrin and Josh O'Connor, who play Prince Charles and Diana in The Crown, were named best actor and actress in a TV drama, while the Netflix series won the gong for best drama overall.

The show also scooped another win thanks to American star Gillian Anderson, who was named best supporting actress for her portrayal of Margaret Thatcher.

In her speech, Anderson gave special thanks to the hair and make-up team, who gave her the "Thatcher helmet" hairdo that saw her through the part.

It was widely expected the late Chadwick Boseman would receive an award posthumously for his final role, as a trumpet player in Ma Rainey's Black Bottom, but that didn't make the moment any less poignant.

The actor's widow, Taylor Simone Ledward Boseman, fought back tears as she accepted the award for best actor in a drama film, as did actress Renee Zellweger presenting the award.

"He would say something beautiful, something inspiring, something that would amplify that little voice inside of all of us that tells you 'you can', that tells you to keep going, that calls you back to what you were meant to be doing at this moment in history," she said.

"And I don't have his words but we have to take all the moments to celebrate those we love. So thank you HFPA, for this opportunity to do exactly that.

Boseman's death came as a shock to Hollywood, with the star having kept his illness private. His films including Black Panther, Da 5 Bloods and Avengers: Endgame were all shot when he was available between surgeries and chemotherapy.

'It is great to be black at the Golden Globes'

Meanwhile lack of diversity was a running theme of the night – perhaps most sharply lampooned by Borat creator Sacha Baron Cohen, who thanked the "all white" HFPA for one of the two awards he picked up on the night.

Following a week in which it emerged that the Hollywood Foreign Press Association (HFPA), which organises the awards, has no black members, it was no surprise to see celebrities highlighting the issue.

The HFPA acknowledged it was not diverse enough in the lead-up to the ceremony, and members also made the point on stage during the event, too, promising to do better.

Starting in her opening monologue with Poehler, Fey said that while awards shows are seen as "stupid", inclusivity remained important.

Dan Levy, star and creator of hit comedy Schitt's Creek, said in his acceptance speech he hoped next year's ceremony would be voted for by a more inclusive HFPA.

"In the spirit of inclusion, I hope that this time next year, this ceremony reflects the true breadth and diversity of the film and television being made today, because there is so much more to be celebrated."

In a powerful speech accepting an honorary lifetime achievement award, Jane Fonda said: "Let's all of us – including all the groups that decide who gets hired and what gets made and who wins awards – let's all of us make an effort to expand that tent. So that everyone rises and everyone's story has a chance to be seen and heard."