Coldplay have been announced as the opening act for this year's Brit Awards – with the band set to perform from the River Thames.

The band, who hold the title of the Brits' most nominated group – with 28 nods in total and nine wins – will play new single Higher Power from a pontoon close to London's O2 Arena, where the ceremony is being held.

Coldplay, fronted by Chris Martin, have not performed on TV for more than a year, and last played at the Brit Awards in 2017, with dance music duo Chainsmokers.

Other acts on the bill include Arlo Parks, Dua Lipa, Griff, Headie One and Olivia Rodrigo, as well as Rag'n'Bone Man and P!nk with the Lewisham and Greenwich NHS Trust Choir.

The Brits ceremony is due to take place on 11 May in front of an audience of 4,000 people, and will be the first major indoor and in-person live music event in the UK in more than a year as part of a government pilot scheme.

Some 2,500 of the spaces available for the show, hosted by comedian Jack Whitehall, will go to key workers in Greater London.

Audience members will have to prove they have tested negative for COVID-19 before they arrive, as well as take a test after the event and provide details for Test and Trace, to build up evidence on the safety of indoor venues.

The 2021 awards will be the most diverse Brits in the event's history, and feature more women than men nominated in the album category for the first time. 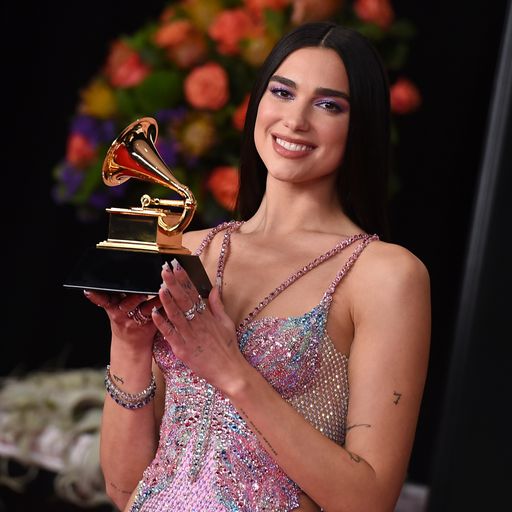 Lipa, Parks, Celeste, rap duo Young T & Bugsey and DJ and producer Joel Corry are all up for three awards, while Jessie Ware, dance music duo Bicep and rappers AJ Tracey, J Hus and Headie One each have two nominations.

Winners this year will be presented with not one but two statuettes, with stars encouraged to share with someone important to them as an "act of kindness".