*** WARNING: THIS ARTICLE CONTAINS SPOILERS FOR THE LATEST EPISODE OF LINE OF DUTY, SEASON SIX, EPISODE SEVEN, AS WELL AS PREVIOUS SEASONS. DO NOT CONTINUE READING IF YOU ARE NOT UP TO DATE. YOU HAVE BEEN WARNED ***

Line Of Duty's star trio and writer Jed Mercurio look set to have a permanent reminder of the show's phenomenal success, following a pact to get matching tattoos.

It comes after the finale of series six saw more than 12 million people tuning in, making it the most watched episode of a drama in 20 years, the BBC said. 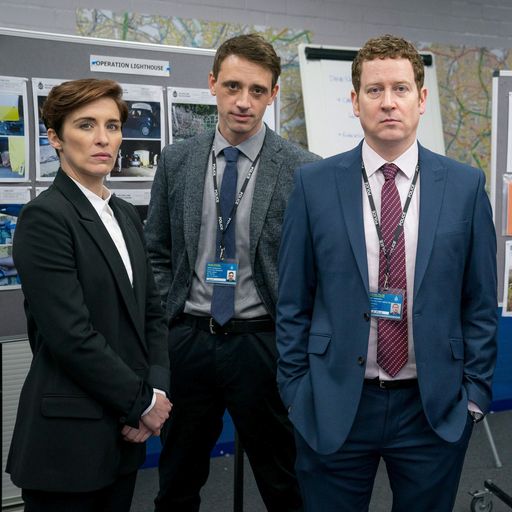 Line Of Duty: All investigations have led to this as finale gives us answers

An average of 12.8 million people – a 56.2% share in overnight viewing figures – watched in anticipation to see DSU Ian Buckells, played by Nigel Boyle, finally unmasked as the mysterious H, the corrupt police officer at the top of Line Of Duty's long-running criminal conspiracy. The episode also had a peak viewing figure of 13.1 million.

Compston revealed on social media that the actors and series creator Mercurio had made a pact to get "AC12million" tattoos should viewer numbers reach the milestone.

"Myself, Vicky, Adrian and Jed made an agreement in the inconceivable and ridiculous scenario we ever got twelve million viewers we would get 'AC12million' tattoos. We'll see who's good to their word…"

More from Line Of Duty

McClure replied: "We are so grateful to you all. So much so looks like I'll have the ink to prove it!"

The finale of series six proved divisive, with some fans unhappy that Buckells was revealed as H. Following ambushes, shoot-outs and DNA reveals, his unmasking made for a slightly less dramatic watch than previous episodes in the season, but answered a lot of questions.

In his post, Compston thanked fans who have been supporting the show, saying the cast had been "blown away by the reaction and love" for the show they are "so proud" of.

He also addressed the reaction to the ending, referencing the season three finale in which Matthew "Dot" Cottan – also known as "The Caddy" – sent an "urgent exit required" text message to his criminal connections in order to flee AC-12's questioning, in one of the most dramatic scenes in the show's history.

"Fully understand it wasn't the 'urgent exit' type ending some anticipated but we appreciate you sticking with us," Compston wrote.

"Felt many emotions from excitement and anxiety at the hype to relief that it's over. Now I just feel immense pride our show that started on Wednesday's on BBC2 has just smashed every overnight drama record since they began."

Mercurio also addressed the series' ending, writing on Twitter: "We're honoured and flattered by the viewing figures for #LineofDuty6. We knew attempting to explore the real nature of corruption in our society wouldn't appeal to everyone, but we do sincerely thank you all for watching. It's been our privilege to share your Sunday nights."