It was the UK's return to indoor live music, marking the start of the road back to normality – and this year's Brit Awards struck just the right tone, with lively performances and stand-out fashion as well as poignant and political moments.

With (almost) no virtual elements, and no social distancing or masks – as part of a government testing scheme – the ceremony certainly made for a much better watch for viewers at home than others such as the BAFTAs and the Oscars earlier this year.

This year's Brits winners were nearly all women, with Dua Lipa, Little Mix, Arlo Parks and Taylor Swift all collecting awards. But there were many other big moments, too.

NHS and key workers honoured – and Boris called out

With 2,500 of the 4,000 tickets gifted to key workers, this year's Brits was always going to shine a light on their incredible work throughout the pandemic.

But, as Lipa put it in her first acceptance speech of the night, this should be about more than just clapping.

"It's very good to clap for them, but we need to pay them," she said as she collected the award for best female solo artist.

"I think what we should do is we should all give a massive, massive round of applause and give Boris (Johnson) a message that we all support a fair pay rise for our front line."

Her speech was met with rapturous applause from the crowd.

Harry Styles and Swift also paid tribute to health workers, with Swift saying that while we have needed music over the last year, "what we needed even more was the help and support that we got from the NHS and the key workers who are here tonight".

Rag'n'Bone Man and P!nk used their performance to honour the health service, singing their song Anywhere From Here alongside the Lewisham & Greenwich NHS Choir and raising funds for charity.

In the 41-year history of the Brits, no female band has ever won the award for best group. Until now.

Little Mix, now a trio following the departure of Jesy Nelson last year, dedicated the award to the Spice Girls and Girls Aloud, saying they could not believe they had never won.

Leigh-Anne Pinnock, Jade Thirlwall and Perrie Edwards took to the stage and included Nelson in their thank yous as they accepted the award.

"It's not easy being a female in the UK pop industry," Pinnock said. "We have seen white male dominance, misogyny, sexism and lack of diversity.

"We are proud of how we have stuck together, stood our ground and surrounded ourselves with strong women and are now using our voices more than ever."

The Brits win comes after Pinnock and Edwards announced pregnancies earlier this month, and the pair joked on stage that they had "baby brains".

Last year, some 12,000 people packed into the O2 Arena for the Brits 2020, one of the last big live events held before the coronavirus pandemic took hold.

This year, safety measures were immediately visible on entering the arena, with hand sanitiser on display and reminders to wear masks in certain areas.

But while the 2021 ceremony was pared back, the crowd – happy to witness the long-awaited return of live music – was so enthusiastic they made up for the lack of numbers.

While Coldplay opened the show from the River Thames, and Dua Lipa's medley of hits got everyone in the party mood, it was two of the later performances that stood out.

Olly Alexander and Sir Elton John teamed up to perform a dramatic version of the Pet Shop Boys' 1980s hit, It's A Sin, inspired by the Channel 4 series of the same name which Alexander starred in. The show explored the HIV and AIDS crisis in London and made headlines following its release earlier this year.

The Years And Years frontman, 30, and Sir Elton, 74, were joined on stage by drag queens and performed against a backdrop of multi-coloured strobes.

Rapper Headie One used his performance to take aim at the government over free school meals, and also addressed the negative public perception of drill music.

Performing his song Ain't It Different alongside fellow nominee AJ Tracey, the 26-year-old appeared inside a box made by fashion designer Virgil Abloh, covered in newspaper clippings, with media quotes describing drill as "a form of aggressive rap music" and "a symptom of societal failings".

In a new verse, he praised footballer Marcus Rashford for his campaign to extend the food voucher system. "The government is saying eat out to help out but won't help out Rashford when he's feeding the youths," he rapped.

Ahead of the ceremony, the Brits had announced that winners this year would receive two trophies – one larger, multicoloured statuette, as well as a smaller metallic version – with stars encouraged to share with someone important to them as an "act of kindness".

Of all the winners, it was Lipa who acknowledged this on stage, sharing her first award for best female solo artist with Dame Elizabeth Anionwu, the emeritus professor of nursing at the University of West London.

Her second gong, for best album, the star dedicated to Folajimi Olubunmi-Adewole, known as Jimi, a young man who recently died after jumping into the River Thames to save a woman.

Calling for a posthumous bravery award for Mr Olubunmi-Adewole, Lipa said he "heroically attempted to rescue a woman who had fallen from London Bridge and tragically… did not survive".

Taylor Swift in the house

The Brits' global icon award had only ever been handed out three times before – to Elton John, Robbie Williams and David Bowie.

It returned this year as an honour for US star Taylor Swift, who made something of a surprise appearance in person to pick up the prize. (She has got a British boyfriend, so hopefully didn't have too far to travel).

Accepting the award from Game Of Thrones star Maisie Williams, Swift began by discussing her passion for the hit show. "Game Of Thrones is my life," the star said, before lamenting the fact she couldn't hug Williams.

Swift then went on to offer words of encouragement to up-and-coming musicians, acknowledging the "many incredible new artists in this room tonight and a lot of people watching who have goals and ambitions and dreams for themselves".

She continued: "I need you to hear me when I say that there's no career path that comes free of negativity. If you are being met with resistance, that probably means that you are doing something new.

"If you are experiencing turbulence or pressure, that probably means you are rising, and there might be times when you put your whole heart and soul into something and it's met with cynicism or scepticism.

"You can't let that crush you, you have to let it fuel you, because we live in a world where anyone has the right to say anything that they want about you at any time, but just please remember that you have the right to prove them wrong." 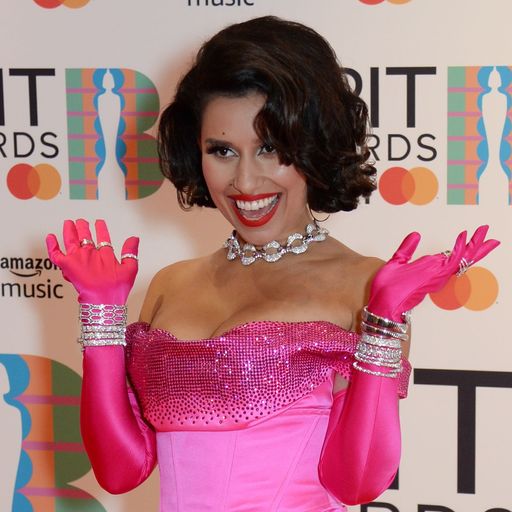 How do you top Swift?

By getting a former US first lady to present an award, of course.

Yes, Michelle Obama was on hand to dish out the prize for best international male solo artist to The Weeknd, who beat acts including Tame Impala and Bruce Springsteen.

Unlike Swift, Mrs Obama didn't make it in person, but you can't have everything.

Presenting the award remotely, she praised The Weekndfor his charitable work as well as for providing "a light that is pretty blinding and giving us all a reason to dance".

So that's a global icon, a former first lady and a history-making girl group – plus they pulled off the best awards ceremony of the last year.