As soon as the wheels on her skateboard turn in competition in Tokyo, 13-year-old Sky Brown will make history. Breaking a record that has stood for almost a century.

It was in 1928 that Manchester-based swimmer Margery Hinton represented Great Britain at the Olympic Games in Amsterdam aged 13.

Sky Brown is marginally younger, having just turned 13, and is widely expected to be one of the stars of the Tokyo games as skateboarding makes its Olympic debut. 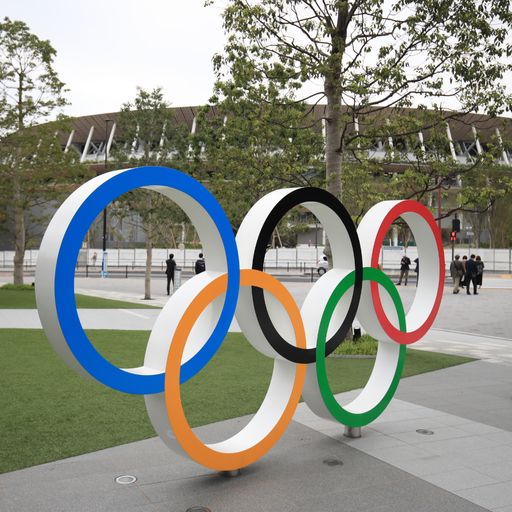 Not every skateboarder wants to see their sport go mainstream but Sky and her teammate, 15-year-old Bombette Martin, are about to do just that.

The teenager, who lives in California and has a father from England, told Sky News she never really feels nerves or pressure when she is on her board.

"No, not for skateboarding… I just want to do my best and see what happens. I don't really get nervous. I just get excited," she said.

Sky had a terrible skateboard accident last summer in which she fell 15ft and fractured her skull and broke several bones.

In a post to her busy social media channels from her hospital bed she made a promise.

"I'm just gonna get back up and push even harder," she wrote.

That is exactly what she has done.

"Falling is part of life," she told Sky News.

"You're going to fall sometimes, but you've got to get back up and do it again and it actually made me stronger and made me want to go harder," she said.

"She's a natural talent. But I'm always careful about how I talk about that because I know how hard she works as well."

"There is an interesting dynamic with the girls at the minute," Darren said.

"Skateboarding has never seen this many women before in its history.

"And the cohort being brought together to do this Olympic qualification is enabling it."

The Team GB skateboard manager has a careful plan in place to ensure the two teenagers are protected from the inevitable flurry of interest when they compete.

"We create the best environment for them so they don't feel overwhelmed by the process. And that's something I've been extremely wary of," he said.

"They're not in their 20s, they're kids, and the most important thing before anything else is making sure that those kids are happy and looked after.

"So the most important thing is that they go there prepared, happy and supported."

Sky Brown will be the youngest summer Olympian for Team GB.

Cecilia Colledge was just 11 when she competed for Great Britain in the Winter Olympics at Lake Placid in the US in 1932.

Sky is aiming higher and is even confident of a medal.

"I can't wait and hopefully, well, I'm trying my best to get gold," she said.

Is there a risk from COVID variants when US and EU travellers enter the UK without quarantine?