Retailers say they are under "increasing pressure" to keep shelves fully stocked amid staff shortages caused by the "pingdemic".

Industry bosses have warned that supply chains are "starting to fail" due to the number of workers, including lorry drivers and meat-processing staff, getting pinged by the NHS COVID app.

Some shoppers have posted pictures on social media of empty supermarket shelves in parts of the country.

The British Retail Consortium (BRC) has now urged the government act to change self-isolation guidance to help address the issue.

Andrew Opie, director of food & sustainability at the BRC, said in-store staff and suppliers should be allowed to work even if they get an alert to self-isolate for 10 days.

"The ongoing 'pingdemic' is putting increasing pressure on retailers' ability to maintain opening hours and keep shelves stocked," he said.

"Government needs to act fast. Retail workers and suppliers, who have played a vital role throughout this pandemic, should be allowed to work provided they are double vaccinated or can show a negative coronavirus test, to ensure there is no disruption to the public's ability to get food and other goods.

"With community cases soaring, the number of healthy retail staff having to self-isolate is rising fast, disrupting retail operations."

PM is 'superspreader of confusion' – Starmer


Being pinged by the app means you should isolate for 10 days – but unlike being contacted by Test and Trace, it's guidance rather than legally mandated.

Latest figures show over 500,000 people were pinged by the app in the week up to 7 July, leading to concerns that millions could be forced out of work as coronavirus cases rise.

The government dismissed calls to change the sensitivity of the app, but has announced exemptions for some workers identified as critical.

Ministers originally said there were no plans to provide a specific list of jobs that would be included – but Home Office minister Victoria Atkins earlier told Sky's Kay Burley earlier that a list of exempt workers is being "worked on". 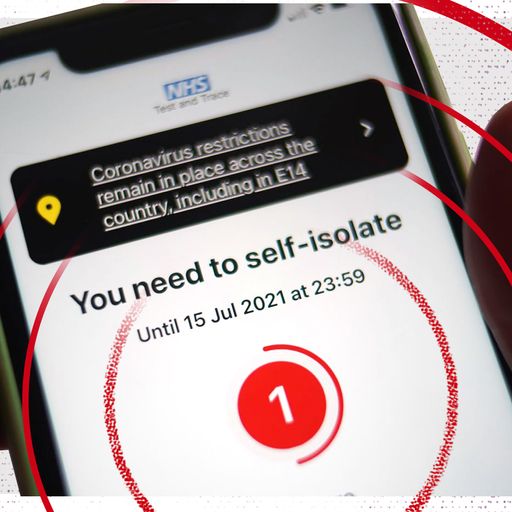 How effective is the NHS Test and Trace app?

British Meat Processors Association chief executive Nick Allen has since criticised "confusing messages" from government as he said ministers have not clarified who is applicable.

Mr Allen said that shortage of skills and workers for permanent positions is reaching a "critically high level", with vacancies already high prior to increased staff isolations.

"We've heard reports of plants having between 10% and 16% vacancies even before absenteeism due to COVID is factored-in," he said.

"On top of the underlying worker shortage, we're also hearing from some members that between 5% and 10% of their workforce have been 'pinged' by the app and asked to self-isolate.

"There's a real air of despondency creeping through the industry."

Calling for the introduction of work permits for Europeans to work in the industry to help plug the gap, he added: "The things the government could do to help us at the moment they're not doing. And the shelves are starting to show."


Nigel Upson, who owns Soanes Poultry, a family-run processing plant in East Yorkshire, said his workforce on Wednesday was down by 20%.

He and many across the poultry industry have had to cut production by as much as 10%.

"What that means is we've stopped all of the jobs that are not processing chicken, for example, the processing of the hearts, liver, gizzards and feet for consumption," he said.

"That's all now going in the skip because we don't have enough staff."

Mr Upson said none of his workers had been pinged but four were self-isolating after testing positive. The rest of the shortfall in numbers was due to long-term job vacancies.

Mr Upson continued: "It's a very difficult period. Things like the 'pingdemic' hasn't helped but the biggest problem is that there are just simply not enough people out there to fill these roles.

"We relied heavily on migrant workers but since Brexit and the pandemic an awful lot of them have gone home. The problem is there's no one to replace them."

Tony Goodger, from the Association of Independent Meat Suppliers, said the pressure looks set to worsen over the summer when meat demand will increase due to barbecues and many people staying in the country rather than travelling abroad on holiday.

But in a blow to those potential barbecue plans, there are warnings that the equipment could be threatened by a shortage in gas cylinders also related to the 'pingdemic'.

Is there a risk from COVID variants when US and EU travellers enter the UK without quarantine?