A report into the collapsed financial company Greensill Capital – which Mr Cameron lobbied ministers for – was published on Thursday. 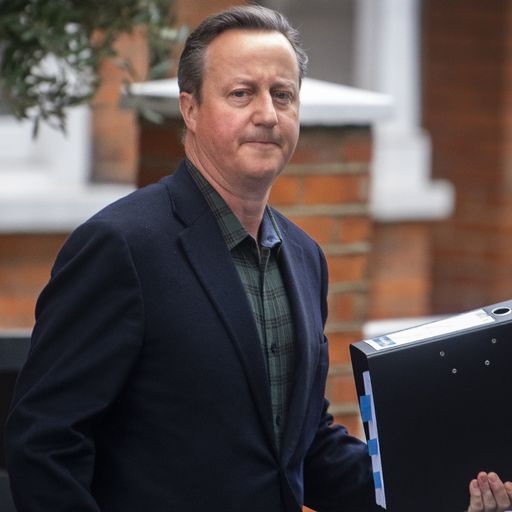 What is the lobbying scandal and why is David Cameron involved?

The Whitehall review looked into how government contracts were secured by Greensill Capital as well as the actions of Mr Cameron.

Comprising of 141 pages, the report said: "It is clear from the evidence that I have reviewed that Mr Greensill had a privileged – and sometimes extraordinarily privileged – relationship with government."

And Mr Boardman concluded that Mr Cameron "did not breach the current lobbying rules and his actions were not unlawful".

"He has, however, accepted that he used methods of communication that were, in hindsight, not the right way for a former prime minister to engage with government," he wrote.

He said that Mr Cameron had told him that Greensill Capital was paying him "a good amount of money every year", and that he had equity and participated in a discretionary uncapped bonus scheme.

The report said the ex-prime minister "could have been clearer about his relationship with Greensill Capital" in his communications with the Treasury, the Bank of England and officials.

Mr Cameron has welcomed the review, saying he was pleased that it "provides further confirmation that I broke no rules".

In a statement, he added: "It also makes plain that I was not responsible for bringing Lex Greensill into government or any of the arrangements connected to this.

"I have said all along that there are lessons to be learnt, and I agree on the need for more formal lines of communication.

"I was open about my relationship with Greensill Capital, and acknowledge the importance of being explicit in this regard.

"It is welcome that updated guidance on how former ministers engage with the government is to be considered."

Mr Cameron was revealed to have approached serving ministers and officials about the involvement of Greensill Capital in government-backed financial support schemes during the coronavirus crisis.

It has since been reported Mr Cameron arranged a "private drink" between former health secretary Matt Hancock and Mr Greensill to discuss a payment scheme later rolled out in the NHS.

Breaking his silence on the controversy in April, Mr Cameron accepted there were "important lessons to be learnt", but stressed he had broken "no codes of conduct and no government rules".

Mr Boardman is a non-executive board member of the Department for Business, Energy and Industrial Strategy (BEIS).

He recently carried out a review into the awarding of Cabinet Office contracts during the pandemic.

The review states that Mr Greensill was given two sets of official IT and security access for the Cabinet Office and, with Lord Heywood's support, Number 10.

Mr Greensill's role in the government gave him a "marketing platform" for Greensill Capital's business with the public sector, Mr Boardman wrote.

"This enabled Mr Greensill to promote a product which did not, in fact, provide material benefits to government […] although it could have been of benefit to his incipient business and was of immediate benefit to his former employer, Citibank," the report says.

Downing Street said it would respond to lawyer Nigel Boardman's report into Greensill Capital lobbying "in due course" once it had considered its first-stage findings.

Responding to Mr Boardman's review, Labour's deputy leader and shadow chancellor of the Duchy of Lancaster Angela Rayner said: "The Greensill scandal proves beyond all doubt that the rules that are supposed to regulate lobbying are completely unfit for purpose and require radical and immediate overhaul."

She said the report was set up as a "classic Boris Johnson cover-up and whitewash to protect the government".