Emma Raducanu has described meeting her parents' expectations after winning the US Open – saying they are her "toughest critics".

The 18-year-old, who won Saturday's final in straight sets 6-4 6-3 against Canadian Leylah Fernandez, became the first qualifier to ever win a Grand Slam singles title, and the first British woman to do so for 44 years.

Speaking to NBC Today, she said her parents are definitely "proud and happy" of her, adding: "They're my toughest critics and so hard to please – but I got them this time!"

Raducanu's parents – Romanian father Ian and Chinese mother Renee – were not able to watch their daughter's triumphant win in person as they could not secure the visas they needed to fly to New York.

Her success has prompted praise from royalty, other sports stars and celebrities, with the Queen and the Duchess of Cambridge among those congratulating the tennis star.

The Queen penned: "It is a remarkable achievement at such a young age, and is testament to your hard work and dedication.

She added: "I have no doubt your outstanding performance, and that of your opponent Leylah Fernandez, will inspire the next generation of tennis players. I send my warmest good wishes to you and your many supporters."

Raducanu said she was "very honoured to receive a note from Her Majesty and the Duchess" and that she was "very grateful" to them.

She said she had received more congratulations but hadn't checked her phone as of yet.

"I'm really trying to let this moment sink in and I had a really nice night with my team on the night of the final." 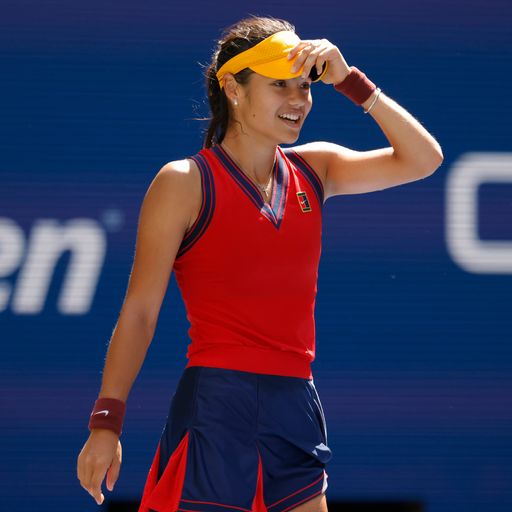 Emma Raducanu: Will the teenager be able to stay at the top in tennis for years to come?

Saturday night's match had a dramatic finale, with Raducanu forced to have a medical time-out after skidding on the court and grazing her leg as she raced to return a ball.

The tennis sensation said it didn't even cross her mind she would come home as the US Open champion.

"I did not think I would last the whole trip," she told NBC Today, adding: "I thought I would be home a week after qualifying.

"I've just been doing my best, taking care of every single day individually to the best of my abilities, and then three weeks later the time has flown and I was holding the trophy at the end.

The teenager appears to be relishing in her hard-earned success as she shared a video of herself in New York on Monday standing in front of a Nike billboard advert using a picture of her from the final.

She captioned the shot: "Sightseeing in ny [sic] never thought I would see this… coolest thing [sic]"


She admitted she felt "a little bit of pre-match nerves" before the final, and that she "didn't feel quite 100%… I couldn't quite put my finger on it."

"It's just a weird feeling, but I think that's just part of the build-up and everything. As soon as I got out onto the court and was just doing what I've done a hundred times before – playing and just focusing on the point – and tactics and not trying to get caught up in anything I felt completely normal," Raducanu said.

Speaking to Sky News just an hour after her incredible victory, she said it had not yet sunk in and "she barely had a moment" to enjoy her success.

Raducanu, whose victory comes just three months after she took her A-levels, said it was a "great level match because Leylah played incredible tennis and we were literally throwing everything at each other", and said and she was proud to come through "some tough moments – at the end especially".