Daniel Craig has been honoured with a star on the Hollywood Walk of Fame in California.

A week after his final James Bond movie was released, Craig became the 2,704th celebrity to have his name placed on 7007 Hollywood Boulevard in Los Angeles.

His star was unveiled in a rare evening ceremony and was introduced by Bond producers Michael G Wilson and Barbara Broccoli, as well as No Time To Die co-star Rami Malek.

Craig, who has played James Bond since 2006, said it was an "absolute honour to be walked all over in Hollywood". 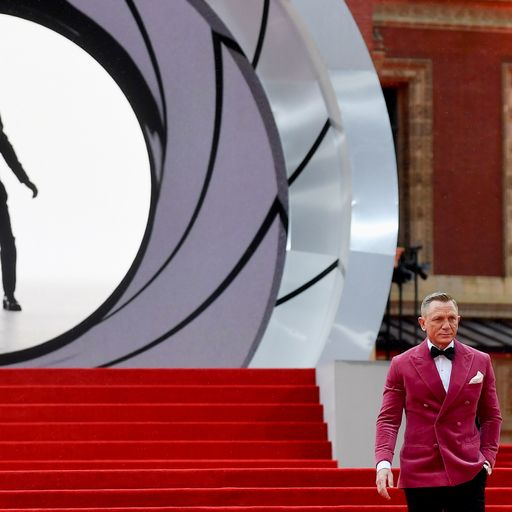 'Genre-bending' Bond film is 'relentless' but worth the wait

"To Michael Wilson and Barbara Broccoli, I thank you from the depth of my heart, without you I would not be here today, thank you for those lovely words. Thank you to Rami for those beautiful, beautiful words," he said.

"I never thought I would hear myself say this, but it's an absolute honour to be walked all over in Hollywood."

Craig, whose final Bond movie No Time To Die has enjoyed a blistering opening at the box office, added: "If happiness was measured by the company we keep then me being on this pavement surrounded by all of these legends makes me a very, very, very happy man. So thank you very much."

The film has won critical acclaim and earned the highest opening weekend takings of any Bond movie in the UK – after it was repeatedly delayed because of the COVID-19 pandemic.

The film will be released in the United States on 8 October.

Stars on the Walk of Fame are awarded every year by the Hollywood Chamber of Commerce, chosen from several applicants.

Recipients also pay a sponsorship fee of $50,000, which covers the cost of creating and installing the star, along with the maintenance of the attraction.

‘We’re like The A-Team’: The Charlatans’ Tim Burgess on marking an unusual 31-year milestone